Human Development Index was created by the Pakistani economist Mahbub ul Haq and Amartya Sen in 1990. It is a composite index of three dimensions and four indicators -Health (Life-expectancy at birth), Education (Mean years of schooling and Expected years of schooling) and living standards (Gross National Income per capita). Countries are ranked into four tiers-Very High, High, Medium, Low and Data Unavailable. The Human Development Report 1995 of the United Nations Development Programme (UNDP) describes human development as a process of enlarging people’s choices. It “must enable all individuals to enlarge their human capabilities to the fullest and to put those capabilities to the best use in all fields- economic, social, cultural and political”.

India has been ranked 130[i] out of 189 countries in the HDR 2018. India’s HDI value for 2017 is 0.640 which put the country in the “medium human development category”. Between 1990 and 2017, India’s HDI value increased from 0.427 to 0.640 an increase of nearly 50% and an indicator of the country’s remarkable achievement in lifting millions out of poverty. Between 1990 and 2017, India’s life expectancy at birth also increased by nearly 11 years. GNI per capita increased by 266.6% between 1990 and 2017 and India’s school-age children can expect to stay in school for 4.7 years longer than in 1990. However, despite huge improvement, India still lags behind all other BRICS[ii] nations on the HDI. The UNDP report also showed that when inequality is factored in, India loses nearly 26.8% of its HDI values and falls to 0.468. It means that outcomes of human development vary substantially with respect to caste, class, and gender. For instance-HDI for men is higher than HDI for women. Historically disadvantaged groups such as Dalits and Adivasis in India, also have lower human development indexes.

The ranking of India is marginally higher than its South Asian neighbors but the country has fallen behind its neighbors on key health and quality of life indicators. India’s 2017 HDI 0.640 is also lower than average of 0.645 for countries in the medium human development category.

India has a GII (Gender Inequality Index), introduced in 2014, the value of 0.524, ranking it 127 out of 160 countries in the 2017 index. The GII can be interpreted as a loss of human development due to inequality between male and female achievements in three GII dimensions of reproductive health, empowerment, and economic activity. In India, only 11% seats of parliament are held by women. Only 39% of women have reached the secondary level of education as compared to 63.5 % of their male counterparts. Female participation in the labor market is also very low (27%) as compared to men (78.8%). 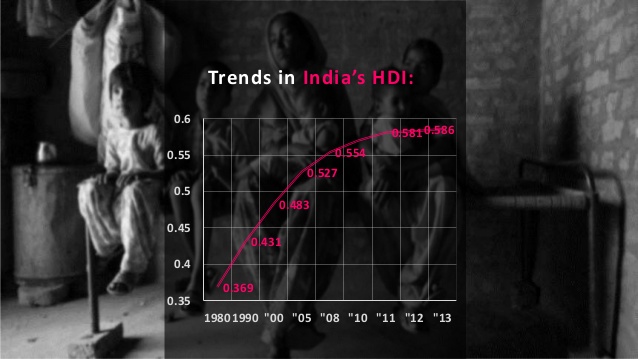 The UNDP HDR 2013 report[i] was themed as “The Rise of the South: Human Progress in a Diverse World” which concluded that sustained progress in human development has led to the rise of the south in unprecedented speed and scale. For the first time in 150 years, the combined output of the developing world’s three leading economies -Brazil, China and India- is equal to the combined GDP of the longstanding industrial powers of the north like Canada, France, Germany, Italy, UK & USA, thus demonstrating a gradual convergence across the world. It also projects that by 2050, Brazil, China and India will together account for 40% of global output.

India’s HDI has been increasing over the years but in recent years despite India being the fastest growing country in the world, the HDI has stagnated. There is also a caveat that there have been various changes in the methodology and continuously tweaking of indicators to measure human development. That is why many experts say that it is misleading to compare the rankings of any country over the years.  There is still a long way to go to reach an adequate level of human development in the country. UNDP report also suggested various measures to improve India’s HDI.

In fact, as per the UNDP HDR 2013, countries that have improved their HDI standing did so on account of three principal drivers: ‘a proactive developmental stage’, ‘tapping of global markets’, and ‘determined social policy and innovation’. On the face of it, Government of India should embark on a journey of the collective effort of setting developmental priorities led by inclusive development, capability approach through redistribution, social security measures and massive investment in health and education.